The year 1861 saw much division in the state of Arkansas.  Many people around Arkansas were excited about the idea of seceding from the United States.  However, there were just as many families living in the mountains and hill regions of Arkansas that were against it.  Phillips County was listed as being in support of secession and that was obvious in January 1861.

On January 16, 1861, a public meeting was held in Helena to discuss the rumor that Federal troops were on their way to reinforce the arsenal at Little Rock.  If that was the case, then militia units from Phillips county would go to the state capital and seize it.  These two militia companies were the Yell Rifles led be an Irish immigrant and former soldier named Patrick Cleburne and the Phillips Guards commanded by W. S. Otey.  They had been created just before 1860 and were itching for a fight.  By February 5th, volunteers had arrived in Little Rock to take the arsenal.  Arkansas Governor Rector sent a not requesting the surrender of the arsenal.  On February 8th, Federal troops abandoned the arsenal and left Little Rock.  They also abandoned Fort Smith in western Arkansas.  On May 6, 1861, Arkansas secedes from the Union after Fort Sumter.  Soon the state joins the Confederate States of America.  By June 3rd, General William J. Hardee was assigned to command Confederate forces in Arkansas.  However, many soldiers didn’t want to join the regular army and a lack of organization would plague the state for the rest of 1861.

If there was a lack of organization in other parts of Arkansas, it wasn’t in Phillips County. 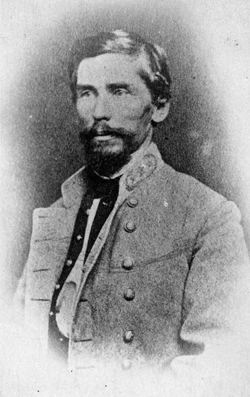 Volunteer companies form eastern Arkansas were ordered to Camp Rector near Memphis to enroll in state service on May 14, 1861.  They would be the 1st Regiment, Arkansas state troops. The Yell Rifles would become Company F and the Phillips Guards would become Company H of this new regiment.  Patrick Cleburne was elected Colonel.  The regiment was transferred from state service on July 23rd and moved across the Mississippi River into Kentucky becoming part of Hardee’s Division, Army of Central Kentucky,  Eventually the regiment would be renumbered the 15th Arkansas and serve out the war in the Army of Tennessee. 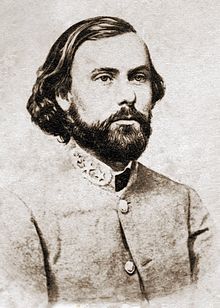 After failing to become a member of the Confederate Congress, Thomas C. Hindman of Helena decide to raise a regiment.  Six companies form Phillips County would make up this new organization that would become the 2nd Arkansas Infantry.  When funding form the state didn’t happen, Thomas Hindman used his own money to feed, clothe, and arm the regiment.  He became colonel and the regiment soon reported to Memphis.  In September, Hindman was promoted to Brigadier General.  The regiment would see it’s first fight at the Battle of Rowlett’s Station on December 17th in Kentucky.  The 2nd would serve with the Army of Tennessee for the rest of the war.

The Helena Artillery was organized at Helena on April 27, 1861 and was enrolled in state service for 3 months.  Captain A. W. Clarkson was the first commander of the battery and many of it’s members were Irish immigrants who worked in the dockyard at Helena.  The battery was mustered into Confederate service on July 6th and soon crossed the river under General Hardee to serve out the conflict in the Army of Tennessee.

The Tappan Guards were organized as a militia company under Captain James C. Tappan on May 23, 1861.  They joined other companies on July 29, 1861 at Camp Ground in Green County to form the 13th Arkansas.  Tappan was made Colonel of the new regiment and Robert B. Lambert became Captain.  The 13th moved to Belmont, Missouri and participated in its first battle there on November 7th.  After the battle they, crossed the Mississippi River to join their comrades in the Army of Tennessee.

Other units and partisan groups would be formed in 1862.