Thats what everybody said about Robert Lee McCollum,  aka.  Robert Nighthawk.  He was born on November 30, 1909 near Searcy, Arkansas.  Many modern day blues artists learned from his style of play.  Men like B.B. King, Elmore James, and Earl Hooker.  Robert came from a musical family.  All his family played from his parents to his siblings.  They played mostly dances, parties, and picnics.  Around 1924, he moved down to Louisiana where he picked up playing the harmonica.  He was multi-talented though.

Robert McCollum got married in 1928 right across the river in Friar’s Point, Mississippi.  That was a major town for blues music back then.  Her name was Mary Griffen.. They had two children, Sam and Ludy.  It wasn’t long before the couple decided to move.  They left their children though.  The road wasn’t a place for kids.  Sam got adopted by the Carr family in Tunica County and eventually would rejoin his Father in the Blues business later. 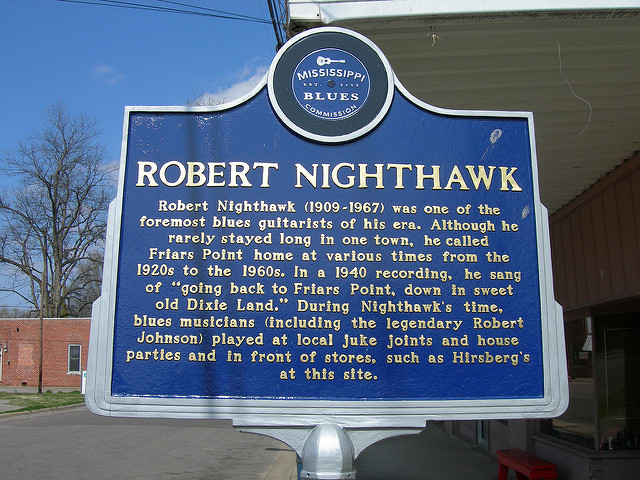 Robert started playing with Houston Stackhouse, who taught him everything he needed to know about the guitar.  They were working on a farm down around Hollandale, Mississippi.  They worked during the day and played dances and parties all night. While down there, he met all the big names like Charley Patton,  Muddy Waters, and Son House.  Robert even played at Muddy’s first wedding.  It was rumored that the place was hopping so much, that the floor collapsed.

By 1932, Robert felt like it was a time for a record deal so he moved to Chicago.  He stopped for awhile in St. Louis though and started playing with Laura Dukes.  They played everywhere from the country stores to the nightclubs.. The pair traveled from St. Louis to Memphis.  Even back down to Mississippi some.  He had to stop going further south for awhile when he was accused of drawing a gun on a fella during an argument.  Chicago, St. Louis, Memphis, and all the towns in between were regular stops.

McCollum stayed up north too long and soon found out that a lot of people down home in Arkansas had forgot about him.  They only remembered one of his songs called “Prouling Night Hawk” that he had written back in 1937.  Because of that, he changed his name to Robert Nighthawk.  Amplified his guitar and got famous.

Around 1942, Sam moved in with him in a house at 308 Franklin Street in Helena.  They started playing together at all the jukes and clubs around Helena, Lula, Moon Lake, and Friar’s Point.  Every night, there were crowds of two or three hundred people.  He got so well known that he started playing on KFFA radio out of Helena.

Robert Nighthawk loved the women. There is no record of how many times he was married, but it was numerous.  In 1947, he took Hazel Moman away from Ike Turner and moved her into the Riverside Hotel at Clarksdale.  Kept another girlfriend named Ethel Mae right down the hall.  Ethel and Robert stayed together until 1953 and had three children.

He could never stay away from Helena long though.  From 1953 to 1963, he played with his son Sam and Frank Frost along with Big Jack Johnson.  They called themselves the Nighthawks.  In 1964, he made another trip to Chicago and recorded several albums.  He started not feeling well about that time and moved back to Helena for good. Robert spent a lot of time with his son at Lula and even visited a faith healer because he thought someone had given him poison whiskey.  The woman told him he was a sinner and couldn’t help him.  Robert McCollum died on November 5, 1967 of congestive heart failure at the Helena Hospital.  He is buried in Magnolia Cemetery and was inducted into the Blues Foundation’s Hall of Fame in 1983.