In the early days of April 1862, a small and tired group of Missourians marched into Helena.  They must have seemed like a strange site to the citizens of the river town since they were the first organized body of Confederates they had seen since hundreds of their men had marched off to war in late 1861 and been sent across the river to defend other people’s homes.  A few scattered groups of cavalry and partisans were around, but they could be just as dangerous to the people of Helena as could the Union armies that were drawing nearer.  They knew their city was open to invasion as were the other counties of the Arkansas and Mississippi delta.  If the appearance of the exhausted former Missouri militia did not bring out much confidence in offering protection, their leader was another thing all together.

Meriwether Jeff Thompson was a Brigadier General in the Missouri State Guard and was nicknamed the “Swamp Fox.” He had been born in Harpers Ferry, Virginia on January 22, 1826.  After marrying, he moved to St. Joseph, Missouri and became that city’s mayor in 1859. As conflict neared, he decided to return to Virginia, but was elected Brigadier General in Southeast Missouri in the State Guard.  It was here that he earned the nickname “Swamp Fox” operating against Federal troops in the marshlands along the Mississippi River. (www.civilwarmo.org Meriwether Jeff Thompson in the Civil War in Missouri.) 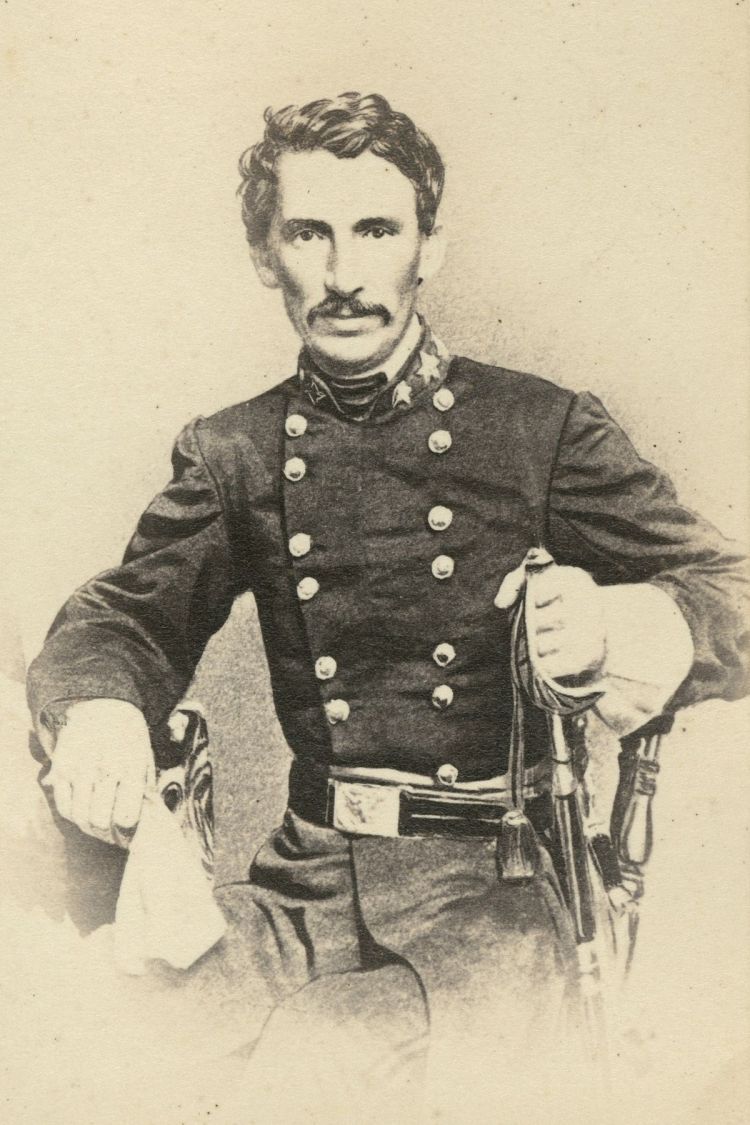 General Thompson achieved national attention after Major General John C. Fremont, the Federal departmental commander, issued a proclamation in August 1861 declaring martial law and authorizing executions of Confederate guerillas. Thompson, in turn, issued a proclamation pronouncing to “hang, draw, and quarter a minion of Abraham Lincoln for every Confederate soldier or Missouri civilian put to death by Fremont’s order.”  On October 17,1861, he burned a railroad bridge at Iron Mountain.  Union forces followed him to Fredricktown where Thompson was defeated on October 21st. (www.civilwaronthewesternborder.org Thompson, M. Jeff | Civil War on the Western Border: The Missouri-Kansas Conflict)

By early 1862, Thompson’s men and other Confederates were stationed around New Madrid, Missouri.  In February, Union Commander Brigadier General John Pope moved south to take the town. After several days of fighting, the Confederates withdrew.  On April 8, 1862, Island Number 10 surrendered and the Mississippi River was open to Fort Pillow above Memphis.

The Missouri men moved south into Dunklin County and then followed Crowley’s Ridge down to Helena. Even though his forces had been defeated and forced back, General Thompson  reorganized them in the first months of 1862. As he marched into Helena, he had two companies of artillery and one battalion of infantry.  Their official designations were companies A, B, and C of the First Battalion Missouri Infantry and the two artillery units were commanded by Captains Bowman and McDonald.  He also had a few companies of cavalry, Although their numbers were small, Thompson felt confident and remained boastful.

General: My men are collecting rapidly, and when my train, which is at Des Arc, is sent around I will be ready for an organization and march in a few days.  I find that several companies, both cavalry and infantry, are twelve months men, which will interfere with the organization without an especial order form you.  If the twelve months men can be attached to the war men I can form a regiment of cavalry, but if you prefer it the war men can be organized into a battalion and the twelve months men either attached or dismounted.  The infantry is in the same condition.  I have two full companies of artillery, and would like to know whether they will probably be kept with the brigade or attached  to the artillery regiment a brigade which I hear is being formed.  If the clothes which Broadwell purchased for my command could be secured, and some good arms and accouterments for the war men, I think all could be induced to go in for the war, and I will be able to report a small regiment of infantry, one of cavalry, and two battalions by next Saturday in Memphis of experienced soldiers, which will fight against any full regiments the enemy may have.  I hope I will not be deemed vain for remarking that as soon as appointed brigadier in the Confederate service I can double by present command.

He followed up on the same day with another letter to Colonel Broadwell, Commissioner from Confederate States to Missouri

Colonel: I have had several persons in hot pursuit of the seven hundred suits of clothes which you purchased for my command, but none of them have yet been able to overtake either you or the clothing.  My men are really suffering, and their ragged appearance, now that they are Confederate troops, is disgraceful to those who should provide for them.  I do not mean you, but myself and quartermaster.  So please hurry them up, and if blankets can be procured, for God’s sake let us have some.

General Thompson’s small command was actually one of the few organized sources of troops to defend the entire mid south against Union domination.  The Battle of Shiloh had took place on April 6 and 7, 1862 along the Tennessee River.  The Confederate Army now under the command of General Beauregard had fallen back to Corinth.  It was now threatened.  Union General Samuel Curtis and his Army of the Southwest were marching across Arkansas after their victory at Pea Ridge.  There was also a Federal fleet just above Memphis.  Fort Pillow had been constructed by the Confederates about forty miles north of Memphis and that was the only defensive works on the river before that important city.   Confederate authorities decided to bring together all the forces they could at Fort Pillow so it was with that in mind that Thompson was ordered to cross the river.  With little flourish, the “Swamp Fox” was gone and Helena was left again on it’s own.  Their only protection had stayed less than a week.

Once at Memphis, General Thompson rushed his men north to Fort Pillow.  Confederate General John B. Villepigue commanded the fort with about 3,600 men as the combined Union army and navy came at him. The desperate Confederates had also created a river defense fleet at Memphis commanded by Commodore J.E. Montgomery.  This small fleet of boats and rams were created from what ever boats they could find.  They were armed with a few cannons and protected with cotton bales.  Because there were not enough experienced sailors, it was decided to use infantry and artillery on board the ships. The “Swamp Fox” and his men now joined the navy.

Captain McDonald’s Company of artillery were placed on board the General M. Jeff Thompson.  That ship was a side wheel steamer that had been selected by Commodore Montgomery and was converted into a ram by placing iron sheeting on the bow and covering it with cotton bales. To honor the “Swamp Fox” and it’s new crew, the ship was named after the General. The company  mustered fifty rank and file and five commissioned officers.  Sections of Captain Parson’s artillery were stationed on the gunboats Sterling Price, Beauregard, and Colonel Lovell. Other Missourians were also put on various boats of the fleet.  Members of the infantry were  stationed on at least three of the boats named the Beauregard, Van Dorn, and General M. Jeff Thompson as marines.  Even General Thompson was on the General Bragg.  With their ships manned, the River Defense Fleet sailed north to do battle on May 10th.  Catching the Union navy by surprise, they managed to ram two northern ships and sink them.  The rest of the fleet moved into shallow water, and the Confederates retreated with their victory.  There was only one reported casualty among the Missourians with a slight splinter wound in the neck. Although the Confederates celebrated, it wasn’t long before things turned bleak.  Many of the Missouri infantrymen and artillerymen resented taking orders from the Navy officers.  It got so bad that General Thompson removed his men from the boats.  On top of that, General Beauregard ordered the Confederates to withdraw from Fort Pillow after Corinth was abandoned.  By the first of June Captain Montgomery and General Thompson were given joint command for the defense of Memphis. Their cooperation lasted one day as the Federal fleet attacked the remaining ships of the River Defense fleet. The ensuing naval battle would last two hours as the outgunned Rebels were decimated. Montgomery asked Thompson for two companies of men for his ships, but they were too late.  By the time General Thompson got to the river front with his men, they could only become spectators like everyone else in the city as the battle unfolded before them on the mighty Mississippi. 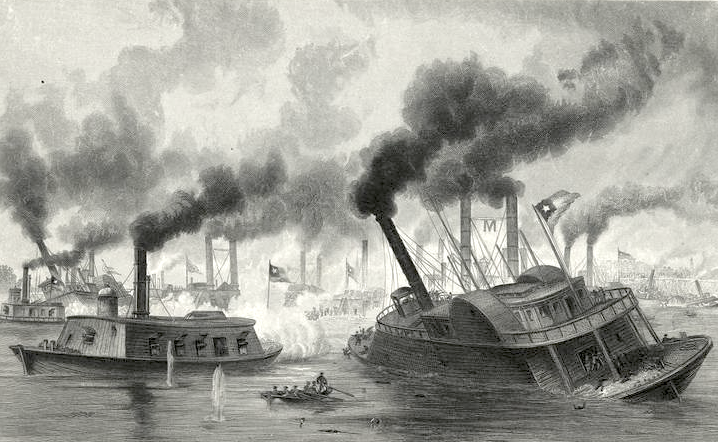 General Thompson in his after action report wrote the following description of the battle:

“The Colonel Lovell was so badly injured that she sank in the middle of the river; her Captain James Delancy, and a number of others swam to shore.  The Beauregard and Price were running at the Monarch (Yankee) from opposite sides when the Monarch passed from between them, and the Beauregard ran into the Price, knocking off her wheel and entirely disabling her. Both were run to the Arkansas shore and abandoned.  The Little Rebel, the commodore’s flag boat, was run ashore and abandoned after she had been completely riddled, and I am satisfied the commodore killed. The battle continued down the river out of sight of Memphis, and it is reported that only two of four boats, the Bragg and Van Dorn, escaped.”

The “Swamp Fox” then loaded his men on trains at the depot and retreated south toward Grenada.  On the same day as the battle of Memphis ended, the city surrendered.  Within just a few days, the Army of the Southwest marched into Helena.  The way to Vicksburg was now open.