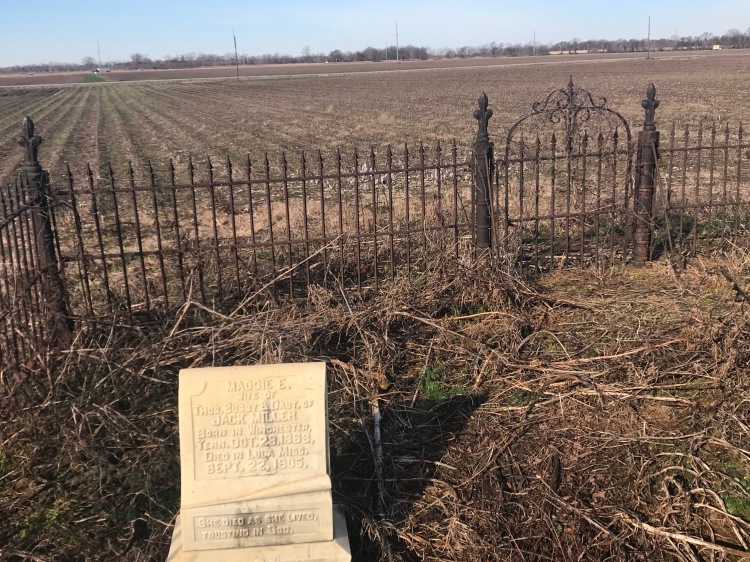 Maggie Elizabeth Busby was born on October 28, 1866 in Winchester, Tennessee.  Winchester is a town in Franklin County on the Alabama state line.  She was the daughter of Jackson Steel Miller and Priscilla Ann Estill.  Maggie Miller was part of a large family with with twelve brothers and sisters.  Jackson Miller is listed as living in District 1 of Franklin County, Tennessee on the 1870 U.S. Census.  His occupation was carpenter and Jackson had a personal estate value of $250 and a real estate value of $500.  There were nine members of the household and Maggie was one of them. All of them are listed as being born in Tennessee.  By the 1880 U.S. Census, young Maggie is listed as being in school and still living in Franklin County, Tennessee.  Her father is identified as a house carpenter.  She married Thomas Busby in 1889 and moved to Lula.  She is listed on the 1900 U.S. Census living with Thomas and his two sons Willie and Ferdel.  They are living in District 1 in Coahoma County.  Thomas was identified as a farmer.  His son Willie was a farm laborer and Ferdel was a book keeper.  Maggie took ill with typhoid fever and died on September 22, 1905.  She was buried on their farm. 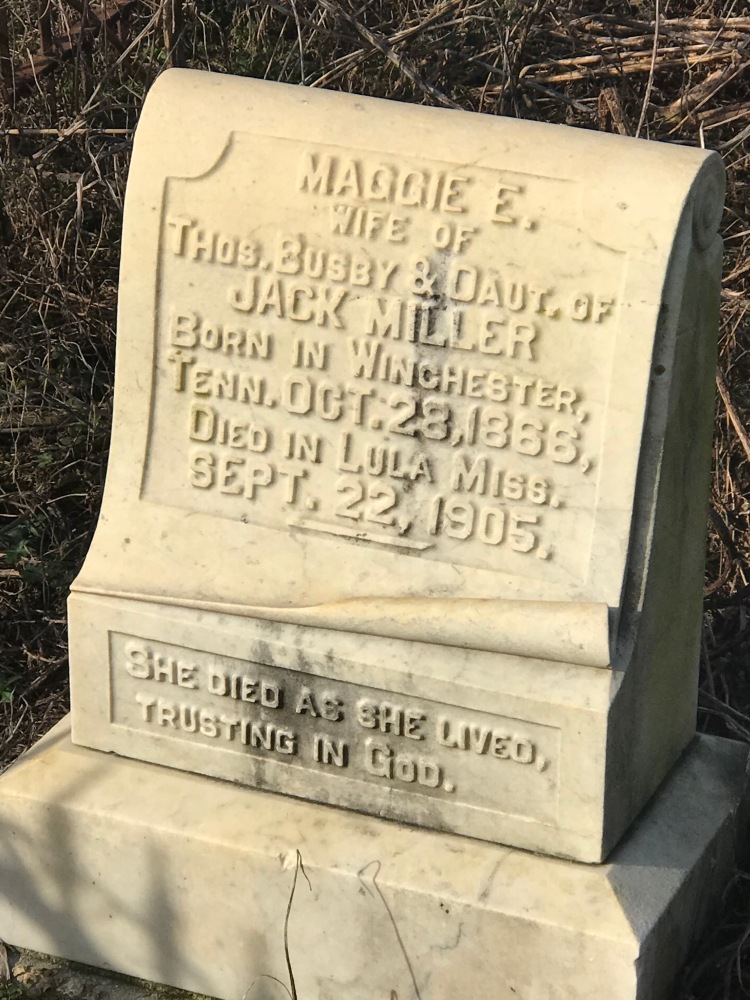 Maggie’s mother had passed away in 1900 and her father, Jack, died in 1901. She had no children, but her siblings were named Frank, Pinkney, George, Charles, John, Maggy, William, Joseph, Frederick, Robert, Jackson, Henry, and Emily.  Although there are no pictures of Maggie, I was able to locate a picture of her brother Pinkney and some of the family from ancestry.com.  Pinkney had moved to Evansville, Indiana and became an Assistant Principal.  He passed away in 1947 and is buried there.

Thomas Busby, Maggie’s husband,  was born in 1854 in Mississippi.  He and his brother Joseph were the sons of Levi Busby and Elizabeth Lee.  According to family history on ancestry.com, Elizabeth was a slave who had been the daughter of Jim Lee.  She had been a favorite daughter of her father, and lived in his house until she grew into young womanhood.  When he died, she was left to Levi Busby who had worked as an overseer for Lee. Levi  married and had at least two sons by her. They were named James A. Busby who was born about 1844 in Mississippi and John W. Busby who born about 1842 in Alabama. There were other children probably. It is very possible that this Levi Busby was the same man who married Nancy M. Nicholson on February 13, 1840 in Madison County, Alabama. On the 1840 U.S. Census,  Levi is listed with one white male 20 – 29, 1 white female 15 – 19, 2 free colored persons, males under 10. The family then migrated to the Mississippi Delta after it was open to settlement.  Not much is known about Levi Busby before the Civil War from official records.  James and John W. both joined Company B  of Blythe’s Regiment which was organized in Tunica and Coahoma Counties.  James was discharged on September 10, 1862.  John would be wounded at both Murfreesboro and Chickamaugua. He was then furloughed home to Coahoma County where he was captured on December 4, 1863.  He would eventually wind up in Fort Delaware before being exchanged on October 24, 1864.  John was then paroled at Holly Springs on July 11, 1865. Levi and most of his family migrated to Brazil after the Civil War as thousands of other Confederates did.  According to a story on Ancestry.com, they sailed from New Orleans and landed at Sao Paulo, Brazil. They received 40 acres if they promised to live on it for 5 years. Like many, he returned home disappointed in what he had found in Brazil.  Some of his family had died in South America. On March 19, 1869, L.M. Busby arrived in New York from Rio de Janeiro, Brazil on the ship Henry and Louise.  James A. Busby, Thomas Busby, and Joseph Busby are also listed on the ship with him. While they were in South America, John and some of the family had remained in Coahoma County.  He is listed on the 1866 tax list as a cotton farmer.  On the 1870 U.S.Census for Coahoma County, Levi is listed as a farmer.  Included in his household are Margaret, Elizabeth, Issac, and Nackarigle. Thomas and Joseph are identified as farm hands living next to their father.  John had married Susan Barbee, who had lost her husband in 1865. They are living in Coahoma County along with her family.  James married soon after returning and was living in De Soto County with his wife and child.  James would die in 1901 and is buried at Goodrum Memorial Cemetery in De Soto county.  After Susan’s death, John married A.E. Magee on June 19, 1873.  John passed away before 1880. His wife appears as a widow on the 1880 census. They would have a son named John William.  He is buried in Busby Cemetery in Friar’s Point.  It is not known what happened to Levi, but it is believed he passed away sometime before 1880 because he does not appear on any more census records.

According to a family story on Ancestry.com, Thomas Busby married a white neighbor named Rachael Beasley.  She was the daughter of J.F. Beasley.  They would have three sons named Willie, Wilson, and Ferd Lee. Only Willie and Ferd would live into adult hood.  By 1910, Ferd Lee is married to a lady named Delia.  They are living with their father Thomas in Lula.  Ferd identifies his occupation as manager and Thomas is a farmer.  Delia lists her occupation as teacher.  About 1929, Thomas moves to West Helena, Arkansas.  He has a new wife named Mary on the 1930 U.S. Census and he cites his occupation as a farmer. By 1940, he identifies himself as being a widower.  He is still living in West Helena, but he has been joined by his son Ferd Lee and his wife. Thomas died on January 26, 1944 in Phillips County.  Joseph Busby, Tom’s other full brother, married Harriet Ann Beal on December 19, 1876 in Helena, Arkansas. He would have a large family and be a farmer.  Joseph died some time in 1940. 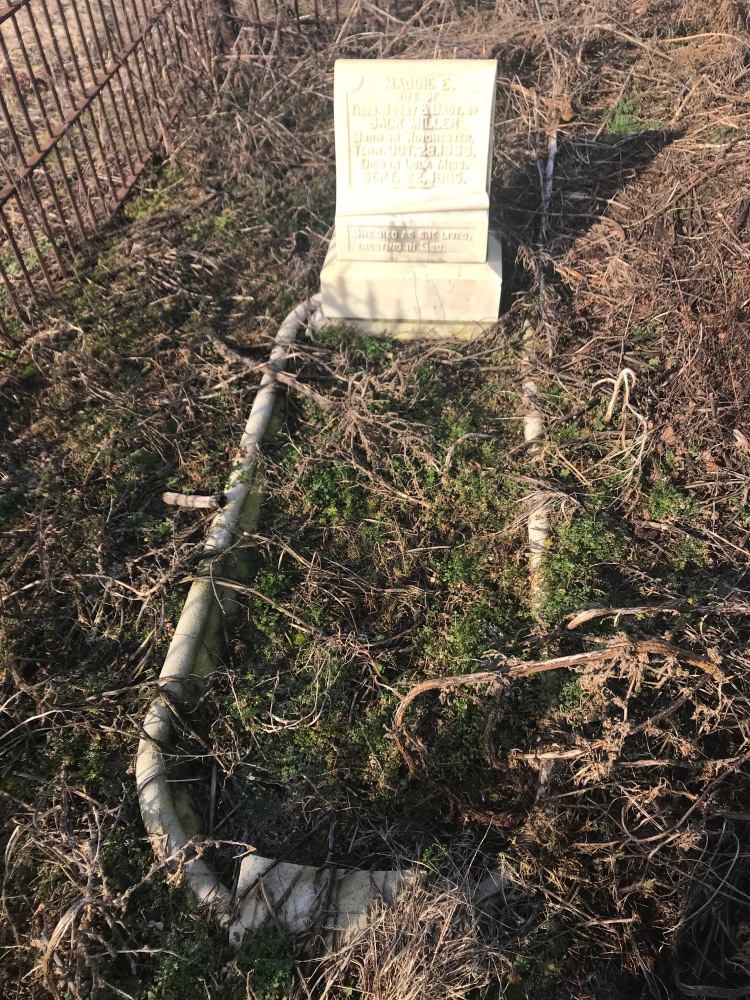 I have drove past this lonely grave of Maggie Busby my entire life.  I often wondered about her.  There were stories, but nothing definite.  My father said that he often saw some of her family visit Lula, but that was a long time ago. Then as they died, the visits stopped.  Each year, cotton or beans would grow up around the slowly rusting fence surrounding the grave.  Maggie saw the seasons come and go.  I finally decided to go check out this small cemetery about two years ago.  Dad said that she was buried alone because of a disease she had and people were scared they would catch it.  The rumor may have saved her burial site because it has stood the test of time through the years where other cemeteries in the Delta have been destroyed.  Maggie Miller Busby deserves to be remembered.  So does her husband and the Busby family. They were some of the first settlers of the Lula area.  The Busby’s were a unique blended family who experienced every aspect of life in the Mississippi Delta.  Their story is the story my Lula.  It is the story of My Delta.