Claiborne County is located in Southwestern Mississippi below Vicksburg and is included in an area referred to as the Natchez District.  The Natchez District was one of the first settled regions of Mississippi and there are a number of old cemeteries located there.  My  Grand father’s family moved from Claiborne County around 1915 to the Mississippi Delta, but always remembered living in that old and special place.  As a child, I always loved to hear stories about the Deans of Claiborne County.  When I got old enough to take trips of my own, my first one was to the old Natchez District in the late eighties.  It was on that trip that I bought a green book titled Claiborne County, Mississippi: The Promised Land and that hooked me on genealogy.  This subsequently started me on a journey which I am still following today.  Here is the first story of my family in My Delta.

In a lonely and almost deserted part of Claiborne County lies Booth-McCaleb Cemetery.  At some point in history it was severely damaged and most of the monuments knocked down.  Cows roam around it at times and the cemetery has long been forgotten by most people.  If angels could be seen weeping, then they would be seen weeping for the memories of those people buried there.  It should have been forgotten, but that green book wouldn’t allow it.  On page 268 Katy McCaleb Headley, author of Claiborne County, Mississippi: The Promised Land, identified the people buried in Booth-McCaleb cemetery.  At the top of the page was the patriarch of the family who was named John Booth, Sr.  John passed away on May 2, 1825 and he happens to be my Great great great great grand father. 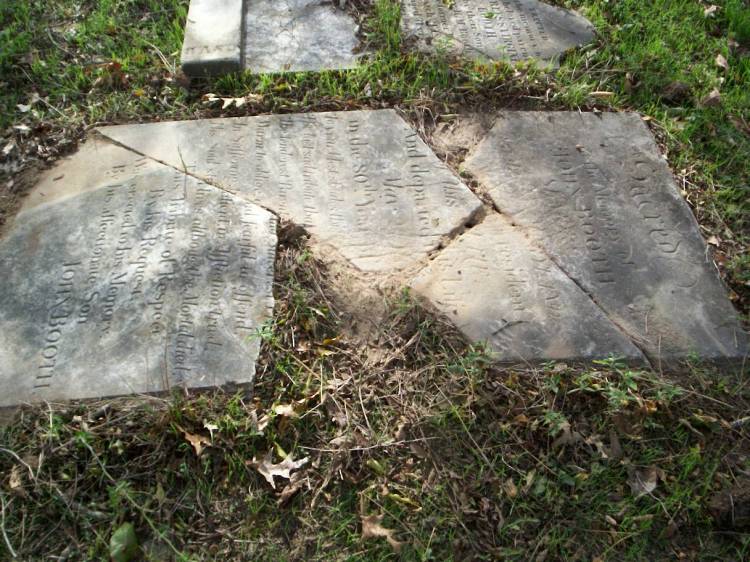 Some enlightened person years ago recorded the inscription of the broken stone belonging to John Booth, Sr.  Although two parts were unable to be read, here is the record:

Sacred to the memory of John Booth Senior

The tenderest parent and the sweetest friend

Warm to oblige and fearful to offend

In suffering, patient, in affliction, tried

His soul still lives although he mortal died.

This tribute of respect, By his request, was erected in his memory

By his affectionate son John Booth

John Booth was born in Maryland around 1745.  Not much is known of his early life, but there were a number of Booth families living in Maryland.  The American Revolution took place between 1765 and 1783.  For a long time, some local historians tried to find a record of his revolutionary war service because a John Booth applied for a pension from Mississippi, but the payment was moved to Alabama.  This actually belonged to another John Booth who first lived in Mississippi before moving to Alabama leaving this John Booth not a Revolutionary veteran. Nevertheless, the American Revolution did impact my John Booth’s life.  Many colonists didn’t support breaking away from Great Britain and were known as Loyalists. Because their neighbors could be vicious in attacking anyone believed to be loyal to the crown, many of them moved to British West Florida or to Canada. Whether John Booth Sr. belonged to this number of refugees or not may never be known, but he appears at Mobile on the Spanish list of inhabitants for March 17, 1780. Mobile had been captured by the Spanish and soon all of the region between New Orleans, Natchez and Mobile was part of the Spanish Empire. It was while living in Mobile that he met the woman who would soon be his wife.

Hester Kilcrease and her husband Robert arrived in Alabama around 1786 from Edgefield, South Carolina.  They had two children named William and Parmelia.  For some reason the couple separated and Robert returned home to South Carolina.  Hester married John Booth and soon the family moved to the Natchez District. Robert would remarry in South Carolina and have at least two more children named Daniel and Robert  Jr. John Booth is listed as living on Bayou Pierre April 2, 1790 where he received a grant of 640 acres on January 1, 1793. He also appears on the Spanish Census of 1792 as “Juan Bouth.”  In a legal document, William Kilcrease is living next to John and claimed to be there when the last of the Spanish soldiers left.  On August 3, 1796, the United States officially took control of the Natchez District after the Treaty of San Lorenzo.  The Mississippi Territory was established on April 7, 1798 and consisted of the present states of Mississippi and Alabama. Eventually, the territory was established to include Mobile and the region along the Gulf of Mexico. The territorial capital was Natchez and later the small town of Washington. Claiborne County was organized in 1802.  John Booth Sr. appears on both the 1810 and 1820 United States Census records for Claiborne County.  During the War of 1812, he was a member of the Frontier Committee of Claiborne County to organize the militia and defend the area from attacks.

John and Hester Booth would have six children together.  Their names were Charles, Elizabeth, Charlotte, Lydia, John Jr. and Hester.

John Booth Sr. died on May 2, 1825.  His wife Hester would pass away on September 2, 1840. Although John did not name the two children that Hester had when they were married, he did name his other heirs in the will.

The property that I have already given or put any of my children in possession of, I now give them exclusive exclusive of the legatees herein provided for, which property, is not to be taken in the foregoing division of my estate.  I have already given my deceased son Charles Booth the tract of land he died on and other property in his lifetime I think equal in value to what I think proper to give his children.  I therefore hereby confirm to the said tract of land  and other property he died possessed of so far as it has come to them thru me in full for their part of my estate.

I have also made my daughter Elizabeth Wright various and valuable donations. I therefore make no further provisions for her or her children she has or may have by her last marriage.

I give and daughter Hester Dean one hundred and fifty acres of land including the plantation she now lives on, it being a part of the tract of land known by the name of the Clark Place, to be laid out adjoining the land I now live on.  In addition to her legacy of the other part of my estate.

Lastly, I constitute, make and ordain my son John Booth Jr. and my trusty friend Daniel Burnet executors of this my last will and testament.