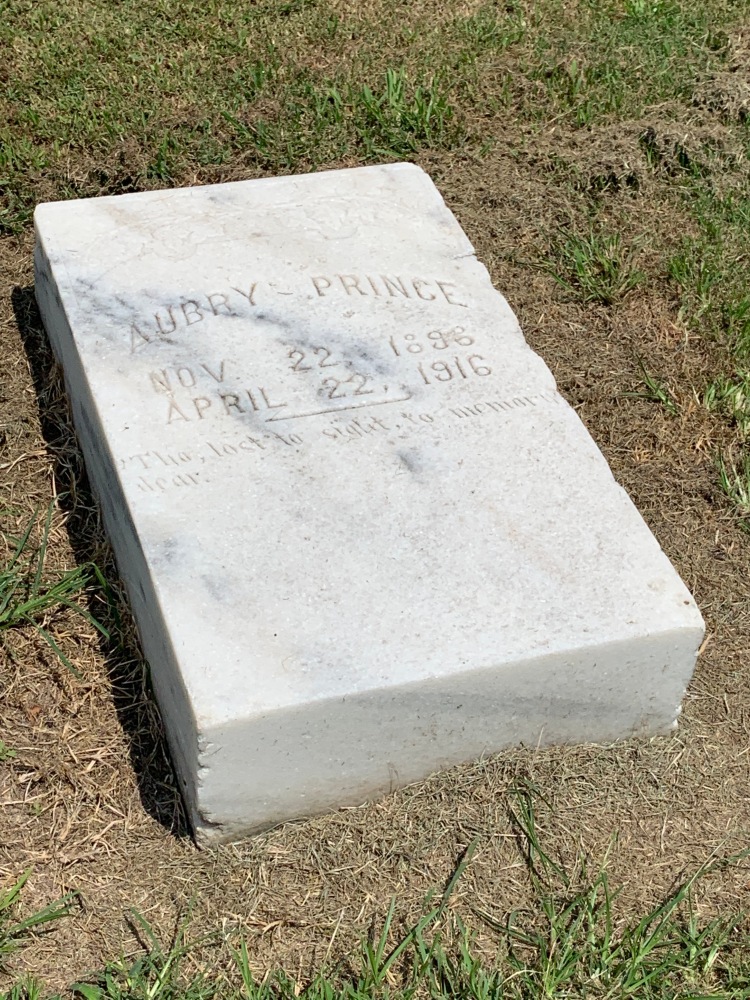 For the last thirty years my parents and I have had to take care of Dowd Cemetery out from Maud in Tunica County.  One of those tombstones  at Dowd belongs to a young man named Aubrey Prince.  Like the few memorials left in that cemetery after it was destroyed in the eighties, it is broken.  The bottom part lies distant from the top.  It is a large white stone stating when he was born and when he died.  Aubrey Prince was born November 22, 1898 and died April 22, 1916. Underneath those dates is a phrase, ” Tho lost to sight, to memory dear.”  His mother’s memorial is nearby.  Her name was Mary E. Prince. She was born July 21, 1873 and died January 10, 1899. Are they related to me by blood? No. But in spirit, they are family.  I had heard my Grandparents talk about Aubrey.  He had been shot down in his innocence.  Although I heard this story so much, I never knew the historical version until I found the newspapers that told the saga.  That story is even more intriguing than what I had heard.  Hopefully,  this will do it justice.

Who was Aubrey Prince?  Aubrey was the great great nephew of Justus W. Lake who founded Maud and was a large planter in Tunica County.  His brother Joseph Early Lake had a daughter named Mary Virginia.  She married Robert Harvey Black.  They had a daughter named Mary Elizabeth who married Joseph R. Prince. This couple would have two sons.  One was Aubrey and the other was Willis. The Princes had moved from Tennessee to Tunica County after Justus Lake had established himself. In 1897, Joseph Prince was appointed postmaster at Austin.  The family was doing well, but that all changed when Mary Elizabeth died in 1899.  The boys were juggled around until Aubrey ended up living with Justus Lake at Maud in 1900. Joseph and Willis moved to Helena and in 1900, Joseph identified himself as a gambler. Aubrey was attending school and Willis worked in a dry goods store.

On April 22, 1916, Aubrey Prince is murdered by Loyce Garner.  There is no disputing this fact, but it divided the county and brought statewide attention. Who was Loyce Garner.  Loyce was the son of Bethel H. Garner.  B.H. Garner farmed out from Tunica and had a large family including four sons. Loyce and Martin were two of those sons who would be involved in this story along with their father.  Garner also had two daughters named Ethel and Frankye. One of these daughters would play a part in this drama,  but I haven’t been able to determine which.

Martin, Loyce and B.H. Garner were all arrested for the murder of Aubrey Prince. Their preliminary trial was held at the end of April 1916 before justices of the peace A.J. McCormack, W.T. Knight and A. Spain.  The Garners were represented by the law firm of Montgomery & Montgomery.  B.H. and Martin Garner were released on a $1,250 bond.  However, Loyce was bound over without bail.

The trial of Loyce Garner began on June 12, 1916 in Tunica. Garner’s lawyers claimed self defense. Because of the families involved, it was difficult to find impartial jurors. On Monday, the first day, over a hundred potential jurors were brought in to the courthouse. Only six were taken. The sheriffs were sent out on Tuesday and brought in more men.  Of that number, three were chosen. Finally on Wednesday, after more were called in, a jury was established for the trial. The state was represented by J.W. Cutrer and Earl Brewer of Clarksdale.  Only two witnesses were introduced by the prosecutor and both told their story of what happened.  On Thursday, the defense of F.A. and Roger Montgomery introduced evidence relating to the irrational behavior of the accused when excited. The prosecution motioned to exclude this argument and the judge sustained. The defense then rested. Dozens of people filled the courthouse on Friday expecting to see an end to this trial.  J.W. Cutrer stood and reviewed the testimony and read the court instructions to the jury.  F.A. Montgomery stood for the defense and the courtroom sighed in anticipation of hearing a stirring argument.  Instead he said nothing and read the instructions.  The jury then retired to weigh the case.  At 9 a.m. on Saturday, the jury returned with a guilty verdict and Loyce Garner was sentenced to life in prison. Martin and B.H. Garner were released.  The case should have ended then, but it didn’t.

In December 1916 the Mississippi Supreme Court heard the appeal for Loyce Garner.  It was in the minutes of this trial that the events of that April day in 1916 were made public.  Attorney General Earl Floyd recounted the sordid details.

“The deceased was of small stature, weighing about 100 pounds, while the appellant was a man of twenty three years, about 5 feet 11 inches in height, and weighted about 160 pounds. On the day of homicide, the appellant and his father, B.H. Garner, and his brother, Martin Garner, left their home in Tunica and went to Maud, in an automobile, where the deceased and Mr. Lake lived. After arriving in Maud, they went to the store of J.W. Lake and told him of the remarks credited to the deceased, alleging to reflect on the character of a daughter and sister, which the deceased, in their presence denied.  It was then agreed that owing to the illness of J.W. Lake, his son Earl Lake and young Prince, would get in the car with appellant and father and brother, and go to Dundee, where they proposed to confront the deceased  with witnesses to his alleged remarks.”

Then followed a recital of what took place at Dundee, and how Goldie Land and a man named Terry verified the remarks concerning young Prince’s alleged remarks, which the latter denied.  Concerning the recital, the brief says:

“It seems that during the conversation in Terry’s store, Earl Lake made some remarks or insinuation as to the truthfulness of the remarks attributed to young Prince and became engaged in a difficulty with Garner, senior, during which Garner drew his pistol and struck or attempted to strike Lake over the head.”

This incident took place in two stores located at Dundee. One was owned by John R. Terry and the other by Harry P. Land.  Goldie Land was his wife.

After the separation of Garner and Lake, the former left the Terry store and returned to Land’s where they met Loyce Garner, telling him of the Lake difficulty.  Upon hearing his father’s statement, Loyce Garner is said to have declared, “I am going to kill the other ____________”, at the same time reaching for his pistol. Before anyone could stop him, Garner turned around and fired at young Prince, who had just entered the rear door, while the latter was some 20 feet distance, apparently unaware of Garner’s intention.

The boy was apparently unprepared for the tragic sequel, walking into the store with his hands at his side and head downwards.  After the shot was fired, he exclaimed, “Oh My God” and fell, dying in 10 minutes.  It appears that all three of the Garners, father and two sons, were armed, and apparently expecting trouble and difficulty, and “were not disappointed of their lust.”

On December 11, 1916 the Mississippi Supreme Court affirmed the conviction of Loyce Garner in the murder of Aubrey Prince.

In March 1917, a petition was sent to Jackson aimed toward getting Governor Theodore G. Bilbo involved in the case.  Seven points were raised to pardon Loyce Garner. First, witnesses who could help Garner were not allowed to be heard by the county attorney.  Second, there was not an impartial jury because the trial was held less than two months after the homicide. Third, Aubrey Prince had slandered his sister throughout the county and refused to apologize. Fourth, Loyce Garner was not of sound mind and had two uncles who were insane. Fifth, on the day of the murder, the deceased had advanced on Garner after his father had gotten into a fight.  Sixth, Loyce Garner was a young man who had never been in any other trouble, And Seventh, although the court has found him guilty, Loyce Garner should be pardoned.  The petition was signed by twelve prominent citizens of the county.  Shortly after, this petition was sent to Jackson, Lieutenant Governor Lee M. Russell traveled to Tunica. Acting as Governor in Bilbo’s absence, Lieutenant Governor Russell pardoned Loyce Garner in July 1917 without giving any reason. At that, Loyce returned home to Tunica County.  To many people living in the Maud and Dundee area, there were questions about whether justice was served or had political influence set a murderer free. Those questions remained for years to follow and some older people still remember today the stories of the murder of Aubrey Prince.  Time has a way of quieting calls for justice though.  As the participants of this story passed away, the memory of the event did as well.  Did money influence the governor?  Why did the leaders of Tunica demand a pardon for Garner? What did Aubrey really say about the sister? To be honest, none of these questions will probably ever be answered.  The murder of Aubrey Prince will just go down as another dark tragedy in the history of my delta but his memorial still stands. Those words engraved on it still hold true:

“Tho lost to sight, to memory dear”