Picture from Research provided by the Tunica Museum and Jennie Burton

Some people become teachers because they view it as an easy job. It isn’t. Others become teachers because they have a calling.  Nancy Jones had a calling and she followed that belief from Tennessee to Africa and back.  Nancy was born January 8, 1860 in Hopkinsville, Kentucky but soon moved to Memphis.  She attended school at LeMoyne  Normal Institute. From there Jones went on to attend Fisk University in Nashville where she graduated in 1886.  She belonged to the famous Jubilee Singers

Nancy Jones became a missionary with the American Board of Commissioners for Foreign Missions (ABCFM). The organization had been formed in 1810 and had a rule that no single woman could be a missionary.  This rule was changed for Nancy because she was the first unmarried African American woman commissioned by the ABCFM.  She would also be the last African American missionary the ABCFM sent to Mozambique, Africa.

Nannie, as she was known, was first sent to the East Central African Mission where she joined Reverend Benjamin F. Ousley and his wife Henrietta.  The missionaries and ministers set up churches and schools. Benjamin and Henrietta Ousley had arrived there in 1884.  The three would work together for a number of years before Reverend Ousley returned to America because of his health in 1893.  Nancy was transferred to a mission in the Gazaland of Rhodesia where she stayed from 1893 to 1897. While there she helped establish a school and taught.  Being the only African American there, she felt discrimination from her fellow missionaries. In 1897 Nancy Jones resigned from the Gazaland Mission and returned to Memphis, Tennessee.

Below: Letter from Nancy Jones to President E.M Cravath of Fisk University about her decision to goto Africa.

“I have prayed to the Lord and asked Him what he would have me to do over since I became a Christian and I believe He has given me the work of a missionary and He directs my mind and heart to Africa the land of my Forefathers.  To those who are calling o their sons and daughters to come and help them….. I am willing to go to Africa as a Missionary and I offer myself to any Missionary Society who wants some one to go to any Foreign Mission.”

You can tell from the above words that it must have truly troubled Nancy Jones to leave her work in Africa, but she came home and threw herself into the work of a teacher.

When Nancy Jones returned home, she did not return alone. A young African girl named Mary came with her. They arrived in New York on board the passenger ship Massachusetts.  Nancy identified herself as a teacher and Mary was a student. Mary would become her adopted daughter, but was sometimes identified as her servant on the census records.

Miss. Jones resumed her duties as a teacher in Memphis and was living with her step father John Harris. Not much is known about her mother, but evidently she had passed away before 1900.  They lived at 400 Broadway in Memphis. This would be her home from 1899 to 1904. By 1915 Nannie Jones was living on Union, but was still a teacher.  She belonged to the First Colored Baptist Church of Memphis. Records also indicated Jones taught some in DeSoto County, Mississippi.

Nancy Jones was soon called to teach in Tunica County at the top of the Mississippi Delta.   She began teaching in a house made available by David Reid located a few miles from Prichard. Some of his daughters would eventually become teachers.  This small school soon expanded.  The Colored Normal, Industrial and Mechanical School of Tunica was established on July 31, 1920. It occupied a former Masonic Lodge and was a two story building.

Classes were conducted downstairs and carried through the 8th grade. As other teachers came in, it was eventually expanded to 12th grade. Miss Jones lived upstairs along with a few boarding students.  Receiving help from the Baptist Church her school was one of two in the county not under the jurisdiction of the county superintendent. Along with general educational skills, the children learned about house keeping, sewing and carpentry. Business skills were also important.  On the 1930 U.S. Census, Nancy was living as a boarder in the Henry Taylor household. She identified herself as a public school teacher.

The school served as a center for the entire community.  Many programs were designed for parents in an effort to help them relate to their children in a positive manner.  Speakers were invited to lecture at the school.  Graduation was truly a spectacle that sometimes went more than two days with singing and celebrations.  Miss Jones often spoke of the Fisk Jubilee Singers and music was always a big part of the curriculum.

Nancy Jones passed away in July 1939 and was buried at Belmont Baptist Church near Prichard in Tunica County.

Entry back to the United States: 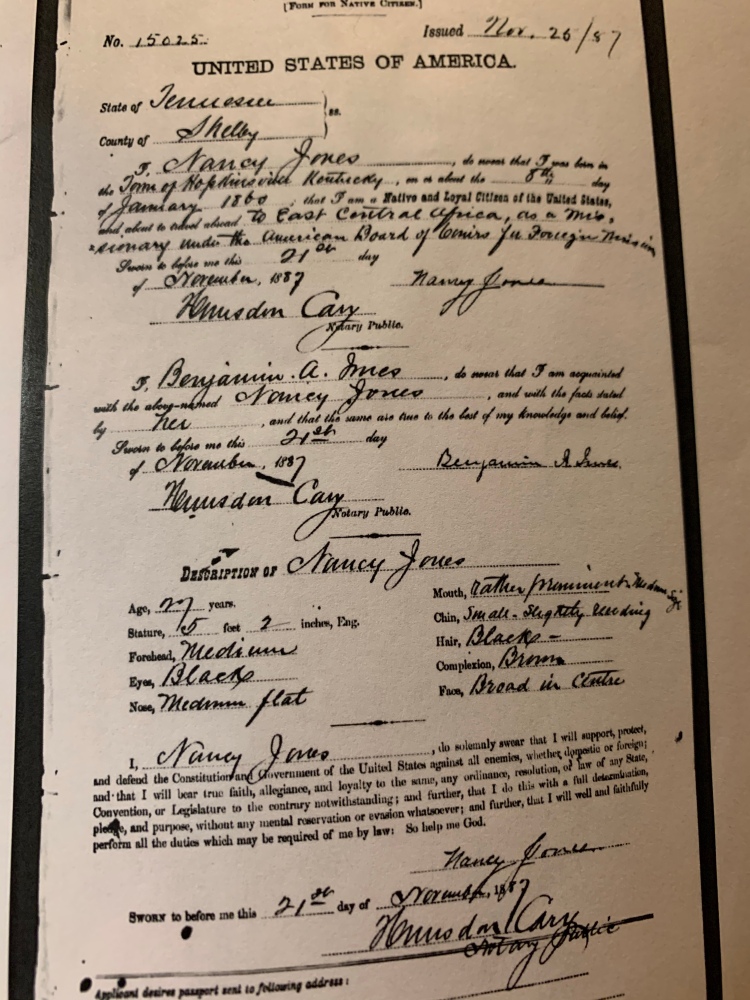 Notable Kentucky African Americans Database: Jones, Nancy and the American Board of Commissioners for Foreign Missions.

Picture from “A Biographical Sketch of Nancy Jones” provided by the Tunica Museum.